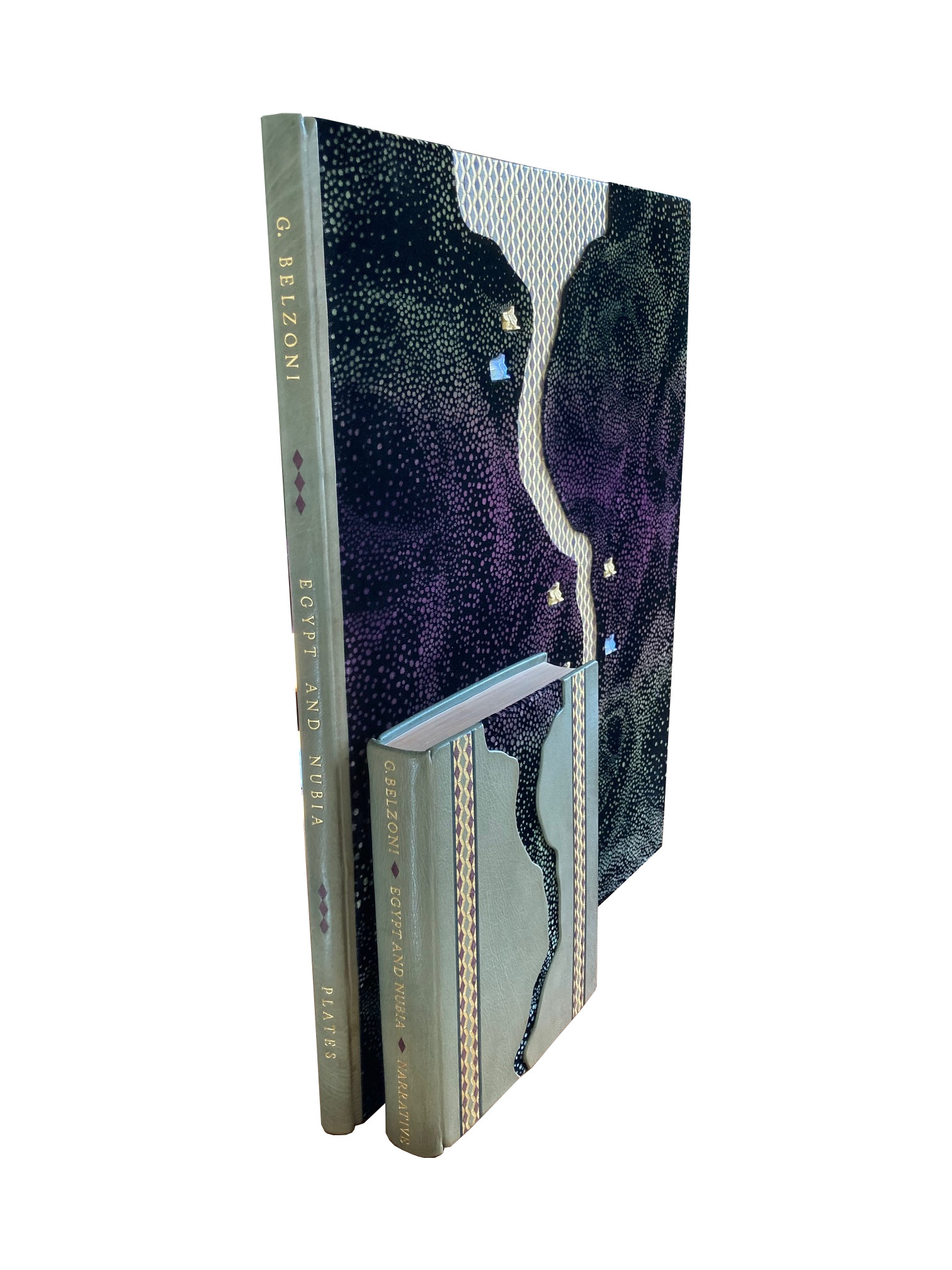 Two volumes complete - Text volume, second edition of 1821, [3], vi-viii, [1], vi-xix, [2], 2-533pp, [1] WITH Plate volume, first edition of 1820, [4], forty-four plates on thirty-four sheets (two folding, all but four in colour). Rebound in 2009 by James Brockman. The text volume in full morocco with smooth back, lettered direct, a slightly recessed representation of the Nile to upper cover in iridescent velvet, with an onlaid band of lozenges to either side, the lower cover with a thicker band of onlaid lozenges to centre. The plate volume bound in contrast, with full decorative iridescent velvet with morocco back, with the slightly recessed representation of the Nile this time in morocco, with early settlements of the Nile represented by small recessed sphinxes, six of which are coated with gold leaf, new endpapers. Some fading to upper cover and spine of text volume, plate volume slightly faded to spine. Internally the text volume is lightly browned and lightly foxed, occasionally heavier, the title especially, the folding map is foxed to folds with Japanese tissue repairs to reverse, tiny tear developing along one fold. The plate volume with some light browning and off setting, but is generally quite bright and clean, one plate with closed tear to bottom margin, a couple of others with small nicks and tears repaired to fore edge. With the original label of the plate volume tipped in to the ffep opposite the title page, and Brockman's binder ticket to reverse of ffeps. This set is without the later supplement of another six plates. Text volume with frontispiece portrait, folding map and one plate of monumental inscriptions, lacking the half-title. Belzoni's 'Narrative' was first published to "coincide with the arrival of the colossal bust of Ramses II at the British Museum" (Keighren, Withers and Bell, 'Travels Into Print', page 169). Abbey Travel I:268; Brunet I:764; Ibrahim-Hilmy I: 61-62; Keighren, Withers and Bell 59

Shipping P.O.A. Subject to quotation and will be charged separately.
Year

The Little Sea Torch: Or, True Guide for Coasting Pilots: By Which They are Clearly Instructed How to Navigate Along the Coasts of England, Ireland, France, Spain, Portugal, Italy, and Sicily Etc Etc

Picturesque Illustrations of Buenos Ayres and Monte Video Consisting of Twenty-four Views: Accompanied with Descriptions of the Scenery, and of the Costumes, Manners Etc. Of the Inhabitants of Those Cities and Their Environs