Aphorismes Civill and Militarie: Amplified with Authorities and Exemplified with Historie, Out of the First Quarterne of Fr. Guicciardine 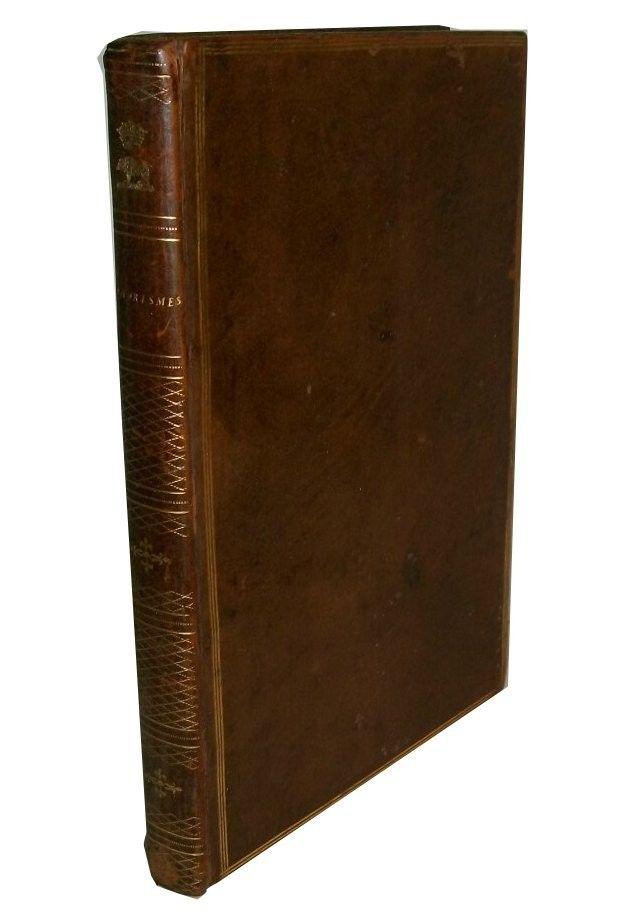 Aphorismes Civill and Militarie: Amplified with Authorities and Exemplified with Historie, Out of the First Quarterne of Fr. Guicciardine

[6], 339, [1], 1-61pp, [1]. Later (eighteenth century) full calf, smooth back, divided into six panels by gilt rules, title in gilt to second panel, third and fifth with diaper pattern, fourth and sixth with part diaper pattern and central lozenge shaped tool, first with the Earl of Granard's gilt stamp, covers with triple fillet border, gilt roll to edges. Rubbed to extremities, especially to joints, couple of minor scuffs to upper cover, corners bumped, lacking initial and final blanks. Small closed tears to upper margin of D4, E1 and E2, previous owners name towards foot of title, modern bookplate to front and rear pastedowns, with note in pen to front pastedown giving the Earl Granard provenance. "Dallington, Sir Robert (1561-1636x8), author and courtier ... Dallington presented Henry with a manuscript translation, �Aphorismes civill and militarie�, selected from the Italian historian Guicciardini. These moves were successful, and from 1610 to 1612 Dallington was fee'd as a gentleman-in-ordinary of the prince's chamber, joining the distinguished group of scholars who attended James I's high-minded heir. Following the prince's death in 1612 Dallington reworked his Aphorismes, which were published in 1613 with a new dedication to Prince Charles. Improbably the ruse worked a second time, and Dallington became one of the few members of Prince Henry's household to be retained by the new heir. It has even been suggested that Charles may have derived his unfortunate persuasion that duplicity was a princely virtue from reading Dallington's Guicciardini" (ODNB). Cockle 84