The Life and Opinions of Tristram Shandy, Gentleman 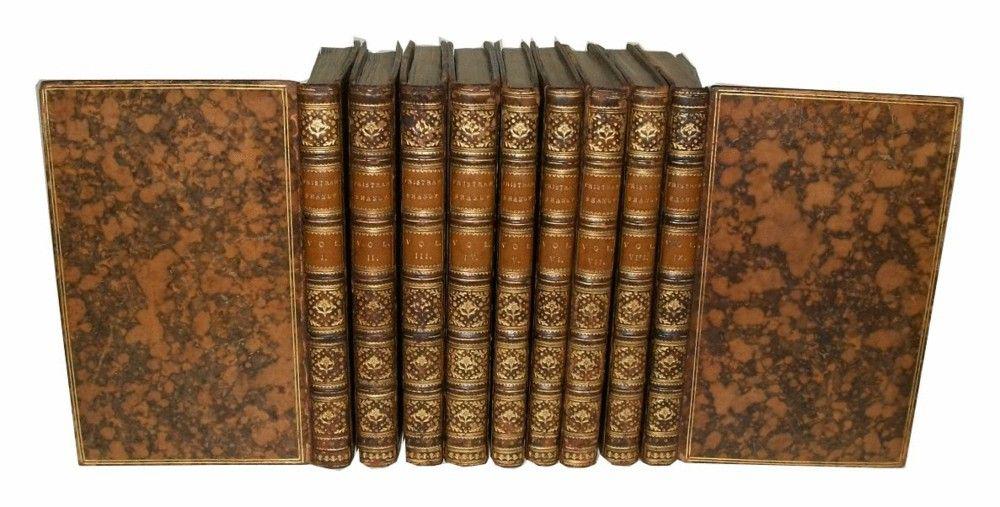 The Life and Opinions of Tristram Shandy, Gentleman

Nine volumes complete - Volume One - [2], 179pp, [1]; Volume Two - [2], 182pp; Volume Three - 202pp; Volume Four - [6], 220pp; Volume Five - [4], 150pp; Volume Six - [2], 155pp, [1]; Volume Seven - [2], 160pp; Volume Eight - [2], 156pp and Volume Nine - [8], 145pp, [1]. Later full mottled calf, raised bands, spines in six panels, morocco title label to second panel, volume label to third, remaining panels with gilt central flower and leaf corner pieces between dog tooth rolls, dates to foot of spines, covers with double fillet border, gilt roll to edge and inner edge, a.e.g. Rubbed to extremities, especially outer joints, but no splits and all holding well. Internally lightly browned, a few patches of minor soiling, but generally fairly clean, front pastedowns slightly rubbed where a bookplate has been removed. Binding is by Riviere, now housed in a partitioned box, with a hinged lid. Signed by Sterne to the first page of text to volumes five, seven and nine as called for, engraved frontispiece in volume four, half-titles in volumes four and nine, but not in volumes five and six. Volume one has E5 printed in black, volume three with the marbled leaf between L4 and L5, volume four with L2r left blank for the readers imaginary portrait of the Widow Wadman - 'as unlike your wife as your conscience will let you' - and without chapter twenty-four (pages 147-155) as called for, volume five without initial blank, but with the misprint on page ninety-seven, volume seven with errata to reverse of title. Bibliographically complicated, this set has the correct first edition York imprint to volume one, it also has the correct York title page to volume two, but the text is from the London edition (ie. with pressmarks), all other volumes are first editions. Wise is, as often, unreliable, the best bibliographical account is Monkman. Rothschild 1970, Lowndes 2510.

The Works of James Thomson - With His Last Corrections and Improvements

A Dictionary of the English Language in Which the Words are Deduced from Their Originals and Illustrated in Their Different Significations By Examples from the Best Writers. To Which are Prefixed a History of the Language and an English Grammar

Silva: Or a Discourse of Forest-Trees, and the Propogation of Timber in His Majesty's Dominions WITH Terra

The Hound of the Baskervilles - Another Adventure of Sherlock Holmes